After arrival Welcome by our English speaking driver and dive to Sigiriya Evening Minneriya or Kaudulla or Hurulu Eco nation parks 4×4 safari according to Elephant’s availability.

Earlier morning Sigiriya Rock before sun become rough which is good for pictures and climbing to the top and back to hotel for breakfast after Drive to Kandy on the way Visiting Dambulla Golden cave tample, Nalanda Gedige & Hindu temple and evening Sri Lanka traditional kandyan dance and Later Temple of tooth.

Sigiriya Rock: Sigiriya is possibly the most spectacular sight in Sri Lanka. This magnificent, massive monolith rises 600 feet (183m) from the lush jungle and was one of the most beautiful royal cities that ever graced the earth, today the “Lion Rock” is one of the best preserved and most elaborate surviving urban sites in Asia and frequently referred to as the eighth wonder of the world Cave Temple Dambulla: cave temple also known as the Golden Temple of Dambulla is a World Heritage Site (1991) in Sri Lanka, situated in the central part of the country. This site is situated 148 km east of Colombo and 72 km north of Kandy. It is the largest and best-preserved cave temple complex in Sri Lanka. The rock towers 160 m over the surrounding plains. There are more than 80 documented caves in the surrounding area.

After Breakfast Drive to Tissamaharama on the way visiting Rawana waterfall and Buduruwagala Rock Temple and 4×4 Safari in Yala national Park Safari in the evening (most visited and second largest national park in Sri Lanka, bordering the Indian Ocean).

After Breakfast drive to Mirissa. Evening at Beach enjoy the beach. 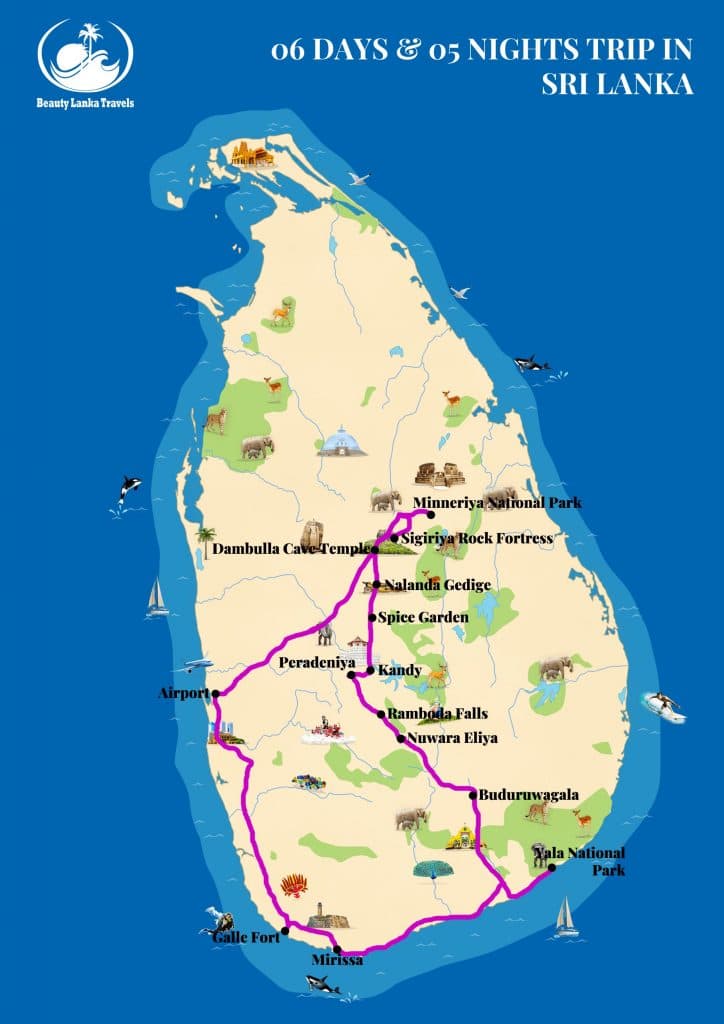