Airport to Chilaw to Dambulla

After arrival welcome by our English speaking driver and chauffeur to Dambulla on the Visit to Muneeshwaram.

Lord Rama after his victorious battle left for Ayodhya in one of King Ravana’svimana’s. He felt he was being followed by Bramhaasthidosham as he had killed King Ravana who was a Brahmin. He stopped the vimana at this juncture because he felt at this place the “BrahmaasthiDosham” was not following him. He ascended from the vimana and asked God Shiva for a remedy. God Shiva blessed Lord Rama and advised him installing and praying four lingams at Manavari, Thiru Koneshwaram, Thiru Ketheshwaram and Rameshwaram in India, as the only remedy to get rid of the dosham. Visit to Manavari Manavari is the first place where Lord Rama installed and prayed the Siva lingam after the end of the war with King Ravana. To date this lingam is called as Ramalinga Shivan. Rameshwaram is the only other lingam in the world named after Lord Rama.

Overnight stay at at Dambulla.

After Breakfast proceed to Trincomalee. Trincomalee, the city which houses one of the best natural deep-water ports in the world, has a legacy that has painted history since royalty throughout colonization, heading towards modern Sri Lanka revamping a fancy development effort. If adventure is your pick, then head few more kilometers to be ‘whaled’ by the giant fins that crash down the blue waves! Meanwhile, head towards the classical-medieval Hindu temple ‘Koneswaram’ which blazes a subtle sense of Dravidian architecture or take a stroll towards the Bhadrakali Amman Temple dedicated to the goddess Kali. And proceed Visit the Shankari Devi Shakthi Peeth Temple is one of the Shakthi Peeta is a place of worship consecrated to the goddess Shakti or Sati.

Afternoon proceed to Kandy Kandy was the last capital of the Sri Lankan kings and is a World Heritage Site. The name “Kandy” conjures visions of splendor and magnificence. Many of the legends, traditions and folklore are still lovingly kept alive. Drive around the Kandy Lake built by the last Sinhala king, Sri Wickrama Rajasinghe in 1798. Visit the Kandy town and bazaar, the arts and crafts centre. Visit to the Sri Dalada Maligawa or the Temple of the Sacred Tooth Relic is a Buddhist temple in the city of Kandy.

Overnight stay at at Kandy.

After Breakfast proceed Nuwara Eliya En- route visit to the Hunuman Temple. On these hills of Ramboda where Hanuman was searching for Sitadevi, Chinmaya mission of Sri Lanka built a temple with Hanuman as the presiding deity.

Overnight stay at at Nuwara Eliya.

After Breakfast visit to the Sita Amman temple. The Sita Amman Temple can be seen on route to Hakgala Botanical Garden along the Nuwara Eliya Badulla Road. The prominent temple architecture will not fail to attract your attention on the way to the Hakgala Botanical Gardens from Nuwara Eliya. According to tradition, the site is associated with Sita of the Ramayana epic. Ancient statues of Rama and Sita can be seen on a side of the temple. The temple seen today is a modern building with its paintings, statues and pillars decorated with sculptures, all depicting the tale of Rama and Sita. The rear of the temple overlooks a stream, while from its front can be seen the Hakgala peaks. The Hakgala botanical Gardens was one of the pleasure gardens of King Ravana of the well-known epic Ramayanaya. This is the exotic pleasure garden where king Ravana kept the depressed Sita, insisting that she marry him. It was here where the heart-warming meeting took place between her and Hanuman, who brought her Rama’s ring with the news that Rama was looking for her. He offered to carry her back but she refused saying it would be an insult to Rama’s honour if he did so. Part of this majestic garden still exists. It is also said that Hanuman nearly destroyed it in order to prove to Ravana of the forces against him.

There after proceed to Welimada and visit Divurumpola temple. Although this Vihara is said to be established in the 6th A.D. Polonnaruwa period it has a long history among people of having been started in the time of Rama, Rawana and Sita. Still revered by thousands, this holy haven was the place where Sita performed her Agni Pariksha (proving her chastity) to her husband Rama. Continuing the practice for over thousands of years, villagers still pledge their fidelity or take oaths there and even in certain courts, this agreement was binding. Since that time this place has been respected and worshiped by people down the ages. Furthermore it is said that this place was given the name “Divurumpola” or the place of making a wow. Not only in legends but this name has been inscribed in the moonstone guarding the Devale in the premises.

Continue to Bandarawela and visit Ella. Ella, a small mountain near Bandarawela, boasts three locations linked to the Ramayana where, local legend dictates, Ravana hid Sita. First there is Ravana Ella Cave, situated in the massive Ella Rock. Then there is Ravana Ella Falls and a nearby pool bored out of the rock by the gushing waters where Sita is said to have bathed.

Bandarawela to Kelaniya to Colombo

After Breakfast Transfer from Bandarawela to Colombo via Kelaniya. Kelaniya draws an illustrious significance towards the country along the channels of both, culture and religion. Blended with an absolute importance following the visit of Lord Buddha to Sri Lanka, the Kelaniya temple thrives today drawing thousands of heads from all corners of the world.

Built during the 3rd century B.C. today, proceed to Colombo on the way Visit to Panchamuga Anjaneyer Temple. Colombo Every designer boutique, top-notch cuisine outlet and even the ‘walkover fish tank’, have revamped this colonial masterpiece into one of the trendiest shopping and hangout zones in Sri Lanka.

Overnight stay at at Colombo.

If have time to flight morning shopping and city tour.

After breakfast drive to Airport. 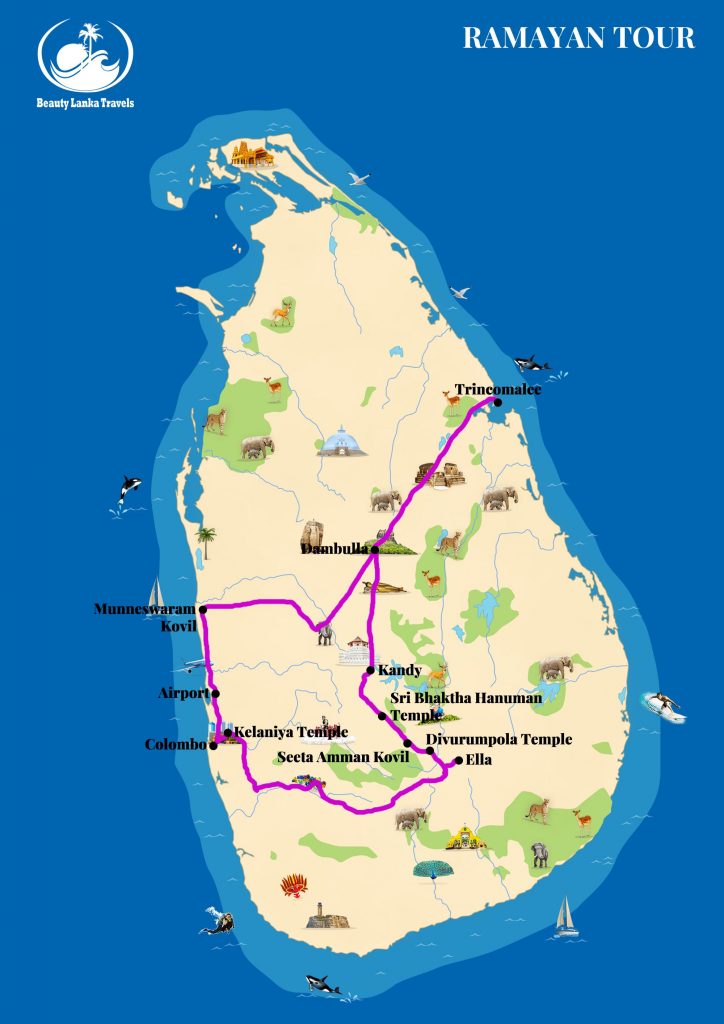