The Anuradhapura Kingdom named for its capital city, was the first established kingdom in ancient Sri Lanka and Sinhalese people. Founded by King Pandukabhaya in 377 BC, the kingdom’s authority extended throughout the country, although several independent areas emerged from time to time, which grew more numerous towards the end of the kingdom. Nonetheless, the king of Anuradhapura was seen as the supreme ruler of the country throughout the Anuradhapura period. Buddhism played a strong role in the Anuradhapura period, influencing its culture, laws, and methods of governance. Society and culture were revolutionized when the faith was introduced during the reign of King DevanampiyaTissa; this cultural change was further strengthened by the arrival of the Tooth Relic of the Buddha in Sri Lanka and the patronage extended by her rulers.

After Breakfast, drive to Sigiriya, on the way visit Mihintale ancient city. And later climbRitigala mountain later diver to Hotel.

Ritigala mountain: At 766 m (2,513 ft) above sea level, and 600 m (2,000 ft) above the surrounding plains, Ritigala is the highest mountain in northern Sri Lanka. The modern name Ritigala is derived from the ancient name AriṭṭhaPabbata (Dreadful Mountain), mentioned in the Mahavamsa.

Its elevation is higher than the other main tourist attractions of the north central plains, namely Sigiriya, Dambulla and Mihintale. The significance of this topographical feature lies in the abrupt sheerness of the massif, its wooded slopes and wet micro-climate at the summit. During the North East monsoon (December to February), Ritigala experiences the highest rainfall (125 cm) of entire dry zone.

The wet micro climate at Ritigala is a singular occurrence in the north central plains, the ancient Sri Lanka’s “Wewe Bandi Rata” meaning “the land of rainwater reservoirs” in Sinhalese.

After Breakfast drive to Polonnaruwa to Polonnaruwa ancient city. On the way farms Lunch (typical Village Style Cooking by handpicking your own vegetables from our organic vegetable farm and partake in cooking with our own Chefs dressed as village folk. You can interact with the chefs from picking of vegetables in the organic garden to cooking them and tasting the curries at the end of class).

Earlier morning Sigiriya Rock before sun become rough which is good for pictures and climbing to the top and back to hotel for breakfast and, drive to Kandy on the way Visit Cave Temple Dambulla, Nalanda Gedige, Matale Spice garden (only for visit) & Hindu temple later Kandy City tour and Evening Gem museum and workshop.

Spice Garden Spice and Herbal Garden you can learn of their medicinal healing properties and how to use them in your day to day needs. Used worldwide in many medicines, the healing powers of spices have been respected from the time of the Pharaohs and Chinese Dynasties, while our herbs are used in Ayurvedic concoctions

Morning Shopping at Kandy and on the way airport visit Tea Factory and later drive to Colombo.

Today is the last day of your Sri Lanka getaway. Collect sweet memories and fly back. 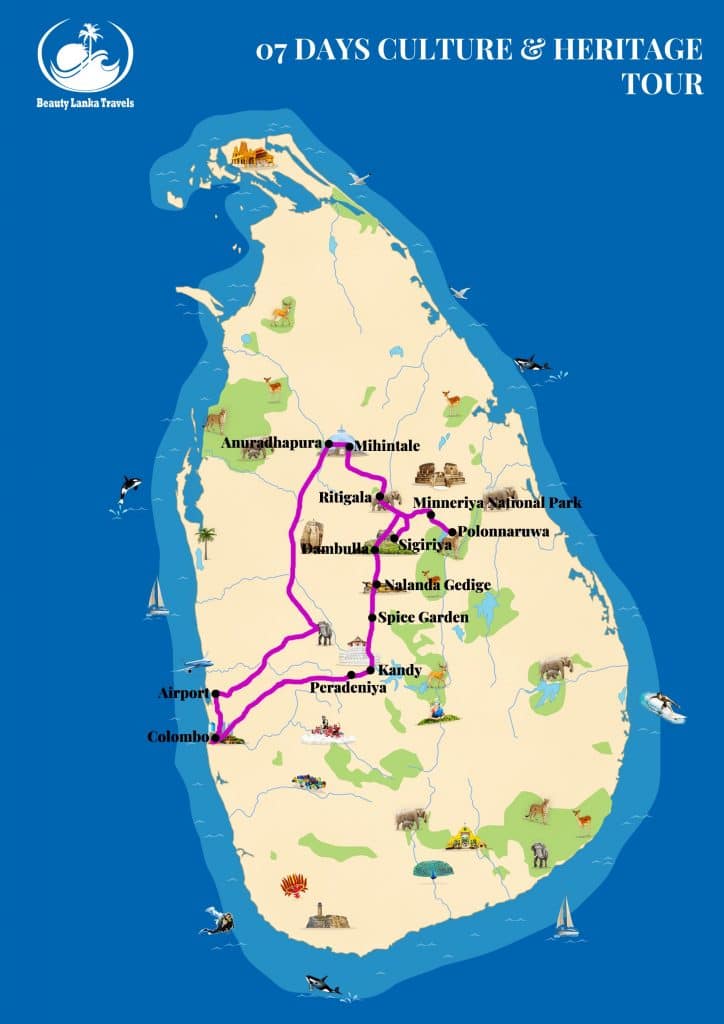